Learning to Love the Threenager Tantrum

It’s certainly true to say that every kid is different, but with my eldest daughter, I honestly didn’t find the “twos” so terrible at all. Yes, there were the occasional tantrums and fraught moments, but generally things were pretty easy.

She’s always had a happy-go-lucky kind of personality. She would typically flit about contentedly, doing her thing. She listened to us, and more often than not would follow instructions without too much fuss. Mealtimes were fairly straightforward. The bedtime routine was mostly bereft of drama. We could fairly well predict how she’d react to most situations.

I was beginning to think that we’d got lucky with this one and was starting to become a little complacent.

And then she turned three.

I’ll start by saying that I’ve enjoyed seeing my daughter flourish immensely this year. She’s become more independent and her confidence has soared. Sometimes I’m amazed at the things she knows and can articulate. There are times I almost forget that she’s only three.

She now suddenly switches back and forth between referring to me as Mummy and Mum (although I’m not sure that I’m ready to be “Mum” just yet!).

Before my very eyes I see her growing into a bright, happy and considerate child. Just what I had hoped for her.

But then there are the “challenges”.

The independence will often now translate to stubbornness and the confidence brings with it a greater degree of willfulness. Her wit is typically accompanied by a good dose of sassiness these days!

But most difficult of all are the mood swings and tantrums which seem to come out of nowhere. We never quite know what might set her off. Only she does. My husband and I tread carefully, trying our best to avoid the triggers where possible, but most often to no avail!

Yes, it would seem that we definitely have a “threenager” on our hands.

It can be maddening at times, and I’m really having to learn how to pick my battles. This is uncharted territory and I don’t always know how to react. It’s been tricky to ensure that that we’re disciplining appropriately while also allowing her to express her frustrations. At the same time, I try to keep in mind that this is all just part of growing up.

One thing’s for sure though… maintaining a sense of humor through it all seems to be one of the best things I can do. The outbursts can be trying to say the least, but they can also be silly and funny (even if it doesn’t feel like it at the time)… and in fact endearing.

Yep, I said it. Endearing. No, that wasn’t a typo and you’re probably wondering what’s wrong with me at this point. So to be clear, I am not necessarily talking about the tantrum itself.  Anyone that’s endured a threenager tantrum and has lived to tell the tale will know how harrowing they can be.

But rather its the random incidents that can spark these epic meltdowns.

When I first started writing this post, it was intended to be a fun and lighthearted rant. Something that other parents of young children would relate to. Fodder to tease my daughter about when she’s a bit older 🙂

But, as I was writing, I had a bit of a revelation.

When you think about it, the tantrums provide a fantastic glimpse into the minds of these amazing little people. They can show us what they care about and what’s important to them… and oftentimes it’s something so beautifully pure and innocent. And it makes me painfully aware that it won’t always be this way (you can read my post about the bittersweet nature of parenting here).

In the blink of eye she’ll be a tween, and then a teenager, and then the issues will suddenly be a whole lot more complicated.

So I say let’s embrace the threenager tantrums! Let’s try to see the funny side whenever we can… and at the very least console ourselves in the fact that they usually pass pretty quickly!

And to better make my point about the true innocence and simplicity of the tantrum triggers, here is just a sampling of the things that set off my daughter this week:

15 actual things that made my threenager cry this week

1. She couldn’t fit a balloon inside her little handbag

2. She wanted to pick purple wildflowers at the park, but there were only yellow ones

3. It was a cloudy day and she wanted the sun to come out so that her glittery shoes would sparkle

5. She wanted her yogurt in a pink bowl rather than her dinosaur bowl

6. She wanted her yogurt in the dinosaur bowl rather than the pink one

7. She just wanted “to be alone”. In the kitchen. And expected everyone else to leave

8. She wanted whole strawberries, but my husband had already cut them into pieces

9. She spilled a small amount of water on herself

10. I had to put her favorite blanket in the washing machine

11. Her baby sister wasn’t in the car when I picked her up from school one day

12. Her baby sister was crying too much in the car on the way home from school another day

13. She wanted to put her boots on all by herself, but then couldn’t do it

14. My husband was carrying her the “wrong way”

15. I told her that she couldn’t wear her princess crown to bed

What random/ridiculous/funny things have caused your little ones to throw tantrums? And how do you deal with it?!

I’d love to hear your stories.

Saying Goodbye to the Baby Years 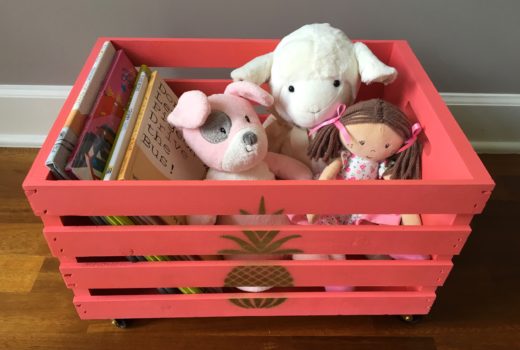 The Little Moments in Parenthood That Matter

Oh @target you just get me 👍 Although judging b

In case you didn’t catch my stories, just wanted

I’ve been keeping an eye out for the perfect coz

I took my two year old to her first ever gymnastic